(27 August 2020) Pakistan’s external debt and liabilities mushroomed to nearly $113 billion at the end of June this year, an addition of $17.6 billion or 18.5% in the past two years, reported the State Bank of Pakistan (SBP) on Wednesday.

When the Pakistan Tehreek-e-Insaf (PTI) government came to power, the total external debt and liabilities amounted to $95.2 billion.In June 2018, the exchange rate was also Rs121.54 to a dollar, which depreciated to Rs162.2, stated the central bank. Within two years, the rupee lost its value by 38.4% against the greenback.

The country’s external debt and liabilities surged to current levels despite payment of $24.5 billion by Pakistan in interest and principal loans over the past two years. The growing debt level suggests that Pakistan has slipped into the debt trap and it is now taking new loans to pay back the old ones. The alarming figures indicate the government’s inability to ensure enough non-debt creating inflows to meet the external account requirements. Owing to huge domestic and foreign borrowing, debt servicing is the largest expense in the federal budget.

Pakistan’s exports remained in the range of $22 billion to $24 billion over the past many years, which forced every government to borrow from external sources to remain afloat. The external public debt, which stood at $75.4 billion two years ago, has risen to nearly $88 billion, an increase of $12.5 billion or 16.5% within two years. Out of the total external public debt, the government’s direct obligations are equal to $70.2 billion, which exclude government-guaranteed and public sector enterprises’ debt. 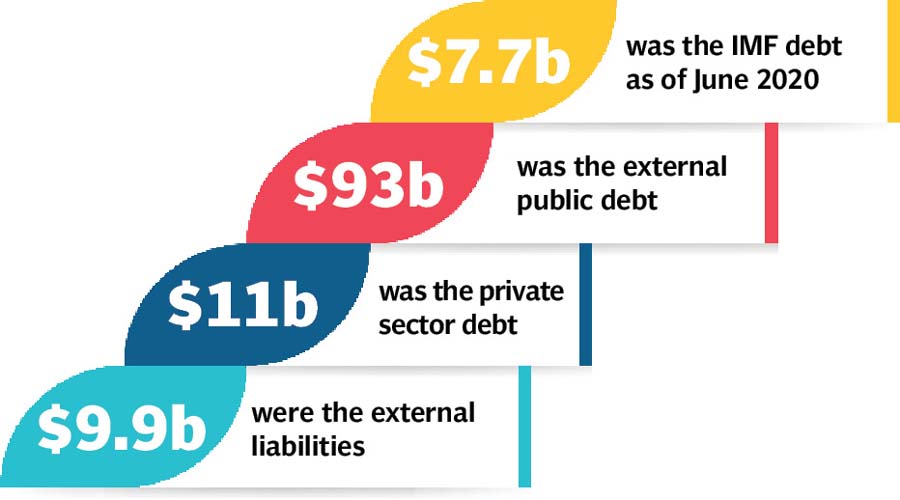 The debt obtained through commercial loans increased to $8 billion by June this year, which also impacted the government’s average time-to-maturity indicator due to the shortening of external debt maturity tenor. The rise in external debt comes at a time when the official foreign currency reserves remain low and the government has to take expensive foreign loans to keep the reserves in double digits.

In June 2018, the SBP’s foreign exchange reserves stood at $9.8 billion, which by June this year increased to $12.5 billion, purely due to loans. Overall, the PTI government added Rs11.35 trillion to the public debt during the first two years in power, which was more than the total debt the previous government had taken in its five-year term.The total public debt as of June 30, 2020 increased to 87% of gross domestic product (GDP), up from 72.5% two years ago.

In terms of size of the economy, the external public debt and liabilities also increased from 33.4% to 45.5% of GDP within two years. The IMF debt, which was $6 billion two years ago, increased to $7.7 billion by June this year, according to the SBP. There was an increase of $1.7 billion or 28% in the IMF debt. Pakistan could not receive two loan tranches from the IMF, totalling $1 billion, after the programme derailed in February this year.

Pakistan’s mounting debt level – Should we need to be alarmed?