By Abdul Khaliq (3 May 2022) Pakistan has plunged into a major political crisis after the removal of Prime Minister Imran Khan on 10 April 22, through a successful no-confidence motion against the PTI govt. The month-long political crisis began on 8 March when the country’s three major opposition parties – the Pakistan Muslim League–Nawaz (PML-N), headed by Shehbaz Sharif, the younger brother of the former prime minister, Nawaz Sharif; the Pakistan People’s Party (PPP), headed by Bilawal Bhutto Zardari, the son of former prime minister, Benazir Bhutto; and the Jamiat-ul-Ulema-e-Islam (JUI), headed by the firebrand Deobandi cleric, Maulana Fazlur Rehman – submitted a joint motion of no-confidence in the Imran Khan’s PTI government. The motion accused the government of poor governance, victimization of the opposition, and failures in economic and foreign policy.

Khan has accused the US government of plotting his ouster from power in connivance with the local politicians and a section of the powerful establishment. Although the US has denied Khan’s assertion, a large majority of Pakistanis tend to believe Khan’s allegation, giving his popularity a new boost. The current political crisis is going to turn serious representing sharp polarization in Pakistani society with more turmoil lies ahead as the former prime minister has announced agitation against what he calls “conspiracy” against his government in the last week of May.

Khan’s anti-American and anti-imperialist narratives are catching the political imagination of the general public, particularly a big chunk of youth, sending irritating waves among the functionaries of establishment and new govt. comprising united opposition. Meanwhile, Khan’s Pakistan Tehreek-e-Insaaf (PTI)- the majority party in the parliament has resigned from the National Assembly, creating a parliamentary crisis.

Washington’s alleged interference in Pakistan’s sovereignty by funding the regime change against Khan’s government by investing in rival democratic institutions has been claimed by the outgoing Prime Minister.

Pakistan’s multilateral approach has been evident in Khan’s foreign policy which antagonized the US. His government’s growing ties with Russia are being seen as a major cause of regime change in Pakistan. The event of Khan’s visit to Russia despite pressure from the US and its coincidence with the Russian invasion of Ukraine has also been recognized as the immediate happening linked to the ouster of Prime Minister Khan from the government, which has been described by Maria Zakharova, the spokesperson of the Russian foreign ministry, as ‘punishment to the disobedient Khan.’

Furthermore, it is believed that Pakistan’s partnership in the de-dollarization drive supported by China, Russia and Turkey is another major cause of the regime change in Pakistan. Pakistan initially signed the Currency Swap Agreement with China back in 2011; however, its extension by the State Bank in 2018 under the CPEC dynamics with the rationale of easing the dollar pressure over Pakistan’s stock exchange proved to be a major development attracting the US concern. Since then, there has been a significant increase in the bilateral currency swap value from Rs 475 billion in 2020 to Rs 731.7 billion in 2021.

It is a fact that Imran Khan’s economic policies were not as good, rather a mixed bag at best, but he deserves credit at least for one thing: he’d taken a bold stance against international investment agreements that give transnational corporations excessive power over national governments [1]. In fact, Khan had begun a process of terminating 23 bilateral investment treaties (BITs) [2] that allow corporations to sue governments in unaccountable supranational tribunals. Instead, he believed such disputes should be handled through local arbitration.

In 2019, a year after Khan became Prime Minister, a tribunal (three private judges behind closed doors, to be clear) of the World Bank’s International Centre for Settlement of Investment Disputes (ICSID) ordered Pakistan to pay an Australian mining company $6 billion in compensation for denying a mining permit on environmental grounds.

A similar suit by the same company, Tethyan Copper — a subsidiary of Canadian giant Barrick Gold, through a different tribunal [3] under the International Chamber of Commerce, brought the total amount Pakistan owed Tethyan to $11billion [4]. The ICSID ruling concluded that Pakistan had violated a BIT with Australia by failing to provide Tethyan “fair and equitable treatment,” a vaguely worded obligation that corporate plaintiffs love to exploit.

The tribunal also decided that denying the license for Tethyan’s Reko Diq gold and copper project was tantamount to “indirect expropriation”. However, the fact remains that the Supreme Court of Pakistan had ruled the permit of the company invalid because the company had violated national mining and contract laws. ICSID’s response was to order Pakistan to draw billions of dollars from its public coffers to compensate Tethyan for their lost expected future profits. The company had only invested about $150 million [5] in the project. But later on, after several rounds of negotiations, the $11 billion penalties on Pakistan were waved off and the company was allowed to resume the project under a fresh contract [6], which the Khan government claims as its victory.

Parallel to the simmering political crisis, Pakistan’s rising external debt is its biggest problem. External debt has swelled to $119.8 billion by Dec 2021. In 2018, it was $93 billion, on which we paid $6 billion in debt servicing. In 2020debt payments on external debt exceeds $12 billion. In 2017, a mere five years ago, Pakistan’s total debt payment amounted to 39% of FBR taxes. Today, our total debt payment consumes 75 % of FBR taxes. Debt-to-GDP ratio has increased from 76% in 2018 to over 90% now. Similarly, with regard to debt to the export ratio: In 2018, we paid 19% of our exports in debt servicing. In 2021 we paid over 35% of exports towards our debt servicing. Based on the current trajectory, by 2025, our debt payments will swallow 100 per cent of FBR taxes. Pakistan will become totally dependent on the bank and non-bank borrowing plus foreign aid [7].

Regarding the debt from China, Pakistan’s situation is the most precarious at the top of the list of recipients of BRI assistance countries, with projects worth $24.7 billion [8]. Pertinent to mention is since 2011, Pakistan has been using the Currency Swap Agreement – a Chinese trade finance facility to repay foreign debt and keep its gross foreign currency reserves at comfortable levels instead for trade-related purposes. The benefit of this arrangement is that the additional Chinese loan does not reflect in the books of the federal government and is not treated as part of Pakistan’s external public debt. 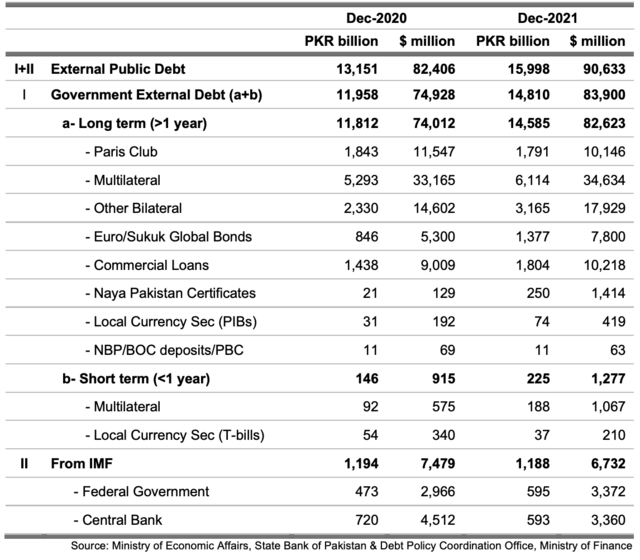 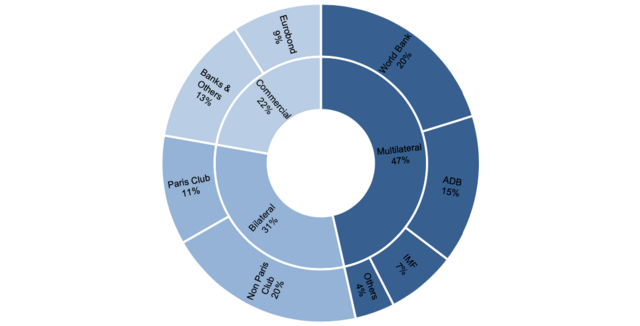 The former prime minister had remained very critical about burying the country under the debt burden by the PPP and the PML-N governments. But his own government broke all previous records when it came to contracting new loans and adding the net debt. Khan’s government took a gross of $57 billion in loans during the 43 months rule. Out of $57 billion, the previous government returned $26 billion in repayments and added $31 billion in the external public debt which is the responsibility of the finance ministry. The PML-N government had taken roughly $33 billion in gross foreign loans during its first four years in power. The net addition during Khan’s period could touch $30 billion.

Meanwhile, with the new government in the saddle, the International Monetary Fund(IMF) has set out five major conditions for the revival of much needed $6 billion bailout package, including reversal of fuel subsidies, increase in electricity tariffs, imposition of new taxes and withdrawal of the tax amnesty scheme, the new finance minister, Miftah Ismail, has told [9]. The conditions have been set out for the next loan tranche of around $960 million under the 7th review of the program. Pertinent to mention is the IMF program remains stalled due to the previous government’s back-pedalling on implementation of the condition it had agreed with the Fund. At the moment three program reviews are pending and their completion will pave the way for the release of a total of $3 billion remaining three tranches before the program is completed in September.

According to media reports, IMF has agreed to extend the stalled bailout program by up to one year and increase the loan size to $8 billion [10]. The size of the loan would be increased from the existing $6 billion to $8 billion – a net addition of $2 billion, the finance ministry believes.

It may be mentioned that the previous PTI-led government and the IMF had signed a 39-month Extended Fund Facility (July 2019 to September 2022) with a total value of $6 billion. However, the previous government failed to fulfil its commitments and the program remained stalled for most of the time as $3 billion remained undisbursed. Media reports also suggest that the new govt. is making efforts to secure further loans worth $ 7-8 billion from Saudi Arabia, UAE and Qatar.

In nutshell, the prevailing debt situation coupled with the worsening political crisis in Pakistan presents a very bleak picture for the people particularly, the working classes of Pakistan, who have been forced to shoulder this burden for decades. A recent World Bank report says 34% of Pakistanis living on just $3.2 a day income [11]. The biannual report issued by the Washington-based lender – also says that soaring inflation disproportionally affected poor and vulnerable households that spend a relatively larger share of their budget on food and energy. The report points out that Pakistan’s key indicators were further deteriorating in the current fiscal year, seeking urgent measures to tighten the fiscal belt for ensuring debt sustainability.